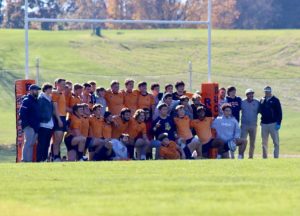 Bucknell Men’s Rugby competes in the MARC Rugby Conference in conjunction with NSCRO (National Small College Rugby Organization) and  USA Rugby. The team practices from 5:00-7:00pm on Tuesdays and Thursdays and plays their matches on Saturday afternoons throughout the fall season.

There are currently over 240 men’s and nearly 130 women’s teams participating in local Unions and Conferences with their eye on the prize of one of five (5) NSCRO Small College National Championships. In addition, NSCRO holds both a Women’s 7s and Men’s 15s National All-Star Championship. This represents nearly 40% of all colleges playing rugby in the U.S.  In 2013, NSCRO was recognized by USA Rugby as an independent organization, sharing similar goals for bettering the collegiate rugby experience.

Want to learn more about Bucknell?